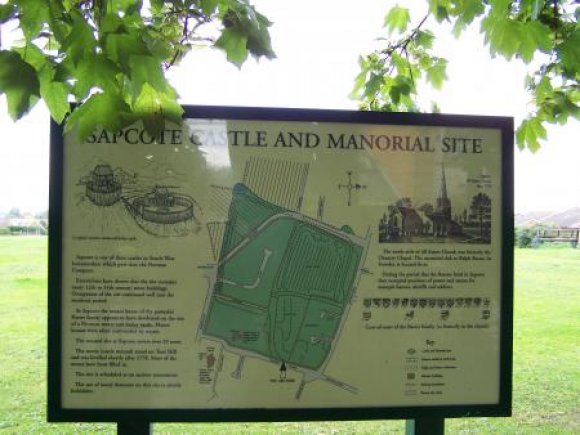 Sapcote Playing Fields was the site of a Norman motte-and-bailey castle and a Medieval manor house.

The manor house of the powerful Bassett family appears to have developed on the site of a Norman motte-and-bailey castle. The motte is recorded as having been levelled shortly after 1778. It stood in Toot Hill Close, and a low mound still remaining there may well mark the spot. Toot Hill Close has an uneven surface indicating the foundations of substantial buildings. To the west is an enclosure surrounded by a large ditch. Excavations carried out here in 1958 suggested that this was a late Medieval or post medieval garden, with fish ponds. To the south is another enclosure, with less substantial earthworks.

Sapcote is one of three castles in south west Leicestershire, with Earl Shilton and Hinckley, which immediately post date the Norman Conquest.

Excavation has shown that the castle contains many stone buildings and the potential for the survival of further buried features is high. The adjoining moat shows that occupation of the site continued well into the medieval period.