Sapcote is a small community with a population of at the 2011 census of 2,442 but this is expected to increase by in excess of 1,000 over the next few years with the present housing developments in the village.

While the village does have a number of older properties, the majority of the residential properties were constructed post 1950. The village is located approximately 4 miles east of Hinckley and is surrounded by open countryside which is substantially agricultural land. There is an Area of Separation to the north between Sapcote and Stoney Stanton. A large part of the Parish is rural supporting a number of farms. The commercial outlets in the village open to the public are limited to a post office, a co-op, a hairdressers, a public house, a working men's club and, on the edge of the village, a garden centre.

There are four disused quarries within close proximity of Sapcote the most well known of which houses the Stoney Cove diving centre.

Sapcote is a village with a long history, Iron Age pottery having been unearthed here. There is also evidence of Bronze Age occupation and a Roman villa and bath house dating from 1st Century AD. The former castle and manorial site was located on the Recreation Ground site and this site is now a scheduled ancient monument 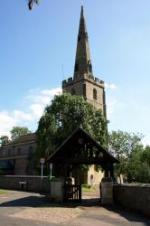